{from Ranai}
It’s been WAY too long since either one of us has posted. That just means we’ve been insanely busy actually crafting… and working our regular jobs! Like most other crafters out there I have become OBSESSED with Pinterest. It is the most amazing way to organize ideas and find new projects from blogs that might not have high searchability on Google. I had been enamored with the idea of a gray, white, yellow and black party that I saw on Pinterest and had a board devoted to the theme without anything to use it for, until I decided on using it for a work birthday party.

At my job I normally get put in charge of organizing all celebrations. This year I rebelled and assigned everyone a “birthday buddy” who is in charge of organizing a potluck and making sure their buddy feels special on their day. I really do like planning the parties, just hate the feeling of panhandling for money from my coworkers, not to mention we now have a staff of 16, which means a lot of parties! My party became a conglomeration of all the crafts I wanted to try that I had pinned.

Our conference room is small and pretty fugly. I knew I had to use existing nails and furniture while making it look as cute as possible. {See more pics below}

For the background of the dessert bar I made lots of paper medallions and glued them on a foam core board. This was way more time consuming than I ever imagined it would be! I’ve since gotten 3 orders for them, which I want to refuse just to save my hands from more glue gun burns.

The banners I cut by hand and used an edge punch on the gray and black polka dot papers. I got the paper for the medallions and the banner at Michael’s on a 5 for $1 sale. {Yay for cheap paper!} I strung them up using some ridiculously adorable yarn I found at Joann’s that has these nubby pieces on it that keeps the pennants from sliding around.

For the desserts I owned all of the plates and jars. The small apothecaries are from Home Goods, the stands are Dollar Tree plates glued on candle sticks with the oh-so-amazing E6000 glue, the tray the rice crispies are on were from a thrift for $2 and the cake plate with dome top is from the good ol’ Salvation Army for $7 {sigh I love to thrift and find awesome bargains}.

I made some flags describing what the desserts are with just paper cut by hand glued on kebab sticks. What’s that font you might ask? Why, it’s only my favorite! Albemarle swash, which can be found here for free. The labels for the candy are just more paper medallions glued on ribbon I found at Hobby Lobby on a 50% off day. Did I mention I love a good deal? I seriously won’t buy something unless it’s at least 40% off or more. Thank the Lord for smart phones with scannable coupons, text coupons, email coupons, mailer coupons… 😀

The “table cloths” and runners are mostly random pieces of fabric. The table cloth on the main eating area was a 2.5 yard, 120″ wide piece of white polyester I got at the flea market for $5 a yard. The yellow runner was a piece of $1 fabric from a thrift that I cut to mimic the pennant shape on the banner. Under the yellow runner was a piece of black and white striped mesh decor that they sell at Beverly’s. I got it at Christmas when it was 80% off. On the dessert table I used a piece of fabric I bought on impulse at Joann’s when it was 60% off.

We have a projection screen mounted on the wall that I really wanted to disguise. I got some crepe paper streamers at the party store for $1 a roll and taped them at the top and the bottom so they didn’t float around then added a banner to finish off the look.

I used a small table from our break room as the beverage station. Those milk glass bottles? I suffered through 16 vanilla flavored Starbucks frappuccino drinks {poor me!}. I then used Goo Gone spray to remove the labels and cleaned them thoroughly with hot soapy water. I searched high and low for the cute paper straws that are in every current party theme, and finally found them at Sur La Table. I hate paying shipping, so I was stoked when my friend was in Carmel and grabbed some for me. To party stores everywhere- PLEASE START CARRYING THESE IN LOCAL STORES!!! 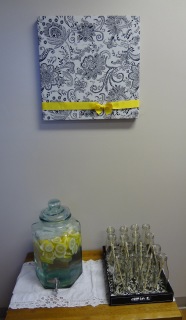 The dining table was very simple. I wrapped a couple of mason jars in lace I bought at the flea market for $2 a yard and finished them with a knotted piece of tulle. I had great intentions to fill them with real flowers, but I ran out of time so these are fakies from Dollar Tree. The center is a Blomster lantern from Ikea that I’ve had for a couple of years now. I made lots of tulle pomsto fill it with. 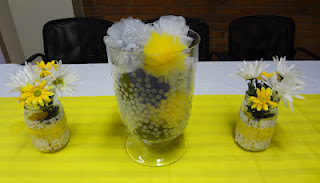 This is always the hardest part for me. I like to bake, but I’m not so awesome at it. I don’t make cake from scratch, EVER. I have one specialty, confetti cupcakes, but I couldn’t make those for this party because they weren’t the right color.

The candy jars are filled with simple treats that I knew everyone would like. The yellow is peanut m&m fun size packets. The gray is Hershey kisses, and the white is Trader Joe’s yogurt pretzels. If you haven’t tried these pretzels before, run, don’t walk, and get them now. The whole bag is less than $4, and they are the best ever!

I really wanted to make lemon bars, but they had so many steps, and I knew I’d be rushed for time so that was a no go. While just browsing the “Everything” category on Pinterest one day, I found Rita’s Lemon Brownies. They were really easy to make and tasted pretty good. I may have even eaten a large spoonful of the glaze before it went on the brownies.

I knew I wanted to make a cupcake with oreos, but I had a hard time deciding on a recipe. Chocolate cake or white? Filled? Start with an Oreo on bottom? So many choices! I settled on a cookies and cream recipe from Confessions of a Cookbook Queen. I probably should have listened to the reviews more because they were a little too sweet, even for me, and I just admitted I ate the glaze for the lemon brownies straight from the bowl. If you decide to make these, put the Oreos for the frosting through a food processor. I just crushed them in a bag, and I thought they were pretty “fine”, but when I went to pipe them on the cupcakes I had a HUGE mess. They meant REALLY FINE…like powdery cookies.

Last but not least, I made rice crispy treats. I can’t believe I made them for the first time ever only a year or so ago. They are so easy and are the first thing gone from the table every time. I generally follow a 6 cups treats, 10 oz bag of marshmallows, 1/2 stick of butter and some vanilla {like a splash in the pan or a lid full}. Most recipes call for just 2 Tbsp of butter, but I’ve learned that more butter = more better.

Notice there aren’t pictures of the food? The food wasn’t pretty! It tasted delicious, but it was very potluck at work style- think lots of Tupperware, foil and plastic wrap. While we normally have birthday lunches, we decided to have a birthday breakfast. This was an AMAZING choice. We had fried potatoes, scrambled eggs, whole wheat English muffins, cheese, turkey bacon, turkey sausage and fruit. It was so simple, but literally was one of the best breakfasts I’ve ever had. I made a sandwich with the English muffins, cheese and bacon. I would like another as I write this.

This party was a lot of fun to plan, and I love the results! The ladies it was created for had grins from ear to ear all day, so the efforts were definitely worth it. 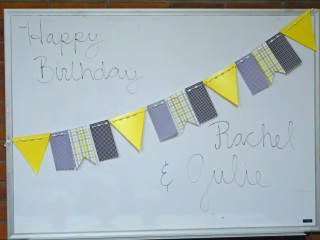